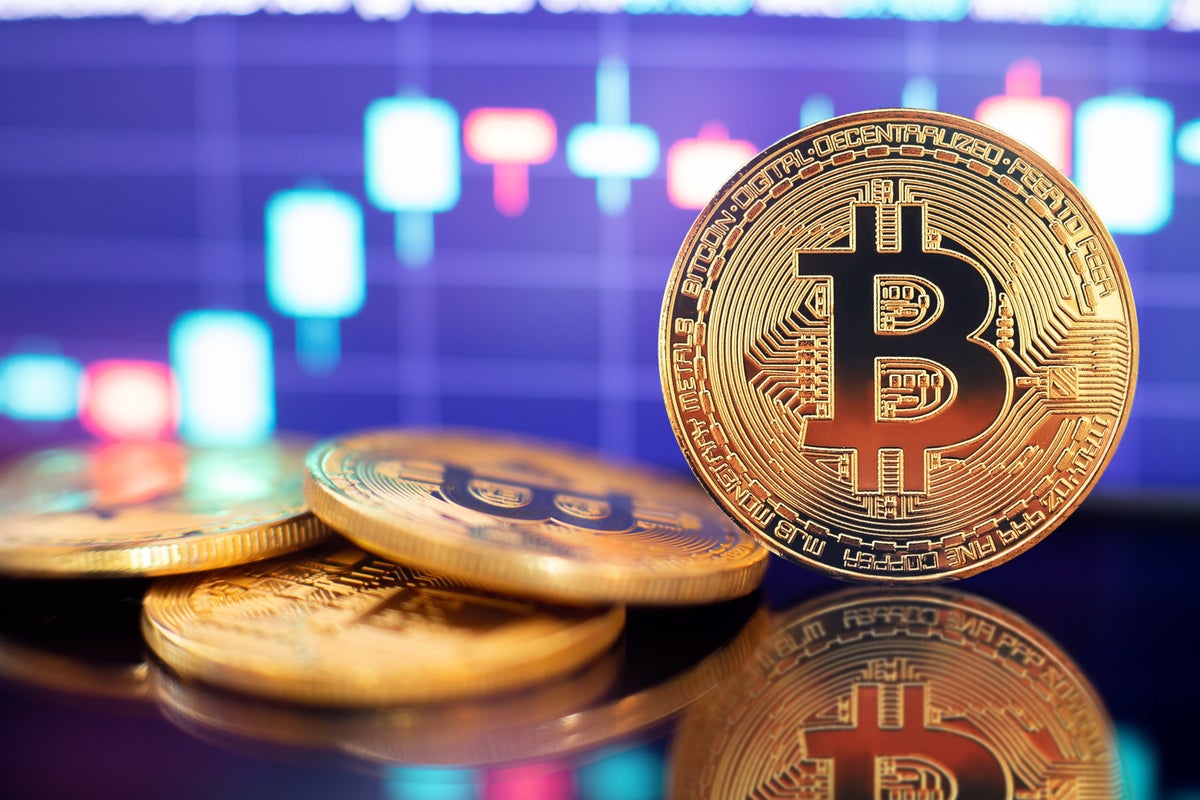 Bitcoin and Ethereum traded in opposite directions Tuesday evening as the global cryptocurrency market cap rose 2.2% to $1.1 trillion at press time.

See Also: How To Get Free NFTs

Justin Bennett said that cryptocurrency could benefit from the S&P 500’s “breakout.” The trader said his target for the index is 4,200 if it can hold 3,900.

Retreat by the dollar also buoyed risk assets. The dollar index, which measures the strength of the greenback against six other currencies, was flat at 106.67 at press time. The index is considerably lower than the 20-year high 109 levels it touched on Monday.

Cryptocurrency trader Michaël van de Poppe said the weakness of the dollar could “put more strength” into cryptocurrencies and Bitcoin.

Shared this chart before, but just like that the $DXY is tanking, resulting into risk-on assets showing some momentum.

Yields need to drop now too, but the weakness on the Dollar could put more strength on #crypto and #Bitcoin. pic.twitter.com/OKRWxe4tT3

On-chain analysis firm Glassnode said in a recent blog that Bitcoin is “reaching peak investor saturation by high conviction HODLers, and it is becoming quite plausible that a genuine bottom formation could be underway.”

Glassnode said that for a market floor to be established, Bitcoin investors need to experience a “wide-ranging capitulation event.” The company said May and June 2022 saw two such events during the Terra Classic (LUNC) collapse.

Despite the surge in price, Bitcoin faces considerable resistance at the $23,360 level, where nearly 108,000 addresses are holding over 100,000 BTC, according to chartist Ali Martinez.

#Bitcoin overcame all major supply barriers it was facing. The only considerable resistance $BTC has yet to break through to continue advancing further sits at $23,260, where nearly 108,000 addresses are holding over 100,000 $BTC. pic.twitter.com/msjV4obeRl

Santiment said on Twitter Monday that while traders are singing a different tune and smelling a Bitcoin breakout, investors should watch out for FOMO or fear of missing out type trades.

The market intelligence platform said that the ratio between BTC longs and shorts is at its highest point since early May.

Traders are changing their tune and are smelling a long-term breakout after a dominant #Bitcoin Tuesday. With the #1 market cap asset in #crypto surging, the ratio between $BTC #longs and #shorts is at its highest point since early May. Watch for #FOMO. https://t.co/4PcBhoKywd pic.twitter.com/dSPmazk1S1

GlobalBlock analyst Marcus Sotiriou pointed to an indicator known as Coinbase Premium Gap, which measures the difference between the Bitcoin price on Coinbase and Binance.

“The Coinbase Premium Gap has spiked significantly. This could be a sign that U.S. investors are buying Bitcoin more than the rest of the world, as Coinbase is mainly used by U.S. investors,” said Sotiriou.

“This could also infer that institutions are becoming more aggressive buyers, as Coinbase has a bigger institutional percentage of users compared to Binance – institutional buy pressure is always a positive sign for bulls.”

Bitcoin bears are in a “shock” right now, according to Gokhshtein Media CEO David Gokhshtein. He urged his Twitter followers to “just enjoy the markets.”

The #bitcoin bears are in shock right now with the way $BTC is moving.

Read Next: Why Ethereum Classic Has Soared Nearly 80% Over Past Week

Photo by Parilov on Shutterstock