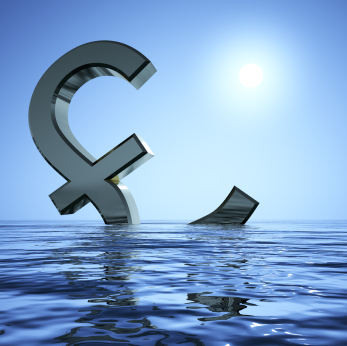 The British pound is down sharply today as the downward trend continues. In the North American session, GBP/USD is trading at 1.1629, down 0.65%. We haven’t seen the pound at such low levels since March 2020.

A gloomy outlook for the UK economy continues to weigh on the pound. The Bank of England has projected that inflation will hit 13%, and some forecasts expect inflation to rise even higher. On Monday, Goldman Sachs said it expected the UK to tip into a recession in the fourth quarter of 2022 and projected that the economy would decline by 0.6% in 2023.

The US dollar flexed some muscles on Friday, after a hawkish speech from Fed Chair Powell at the Jackson Hill Symposium. Powell’s brief speech went straight to the point, stating that the Fed would continue raising rates until inflation was brought under control. Powell pointedly said that one or two weak inflation reports would not cause the Fed to pivot on its aggressive policy, a veiled reference to the market euphoria which followed after July’s inflation rate dropped unexpectedly, as speculation rose that the Fed would make a U-turn on policy.

Powell’s speech removed any doubts about the Fed’s plans to continue raising rates, but the size of the increases will depend on key economic data, not just inflation. Overshadowed by Jackson Hole, US Personal Income and Spending data was weaker than expected. As well, the Core PCE index, the Fed’s preferred inflation indicator, fell to 6.3%, down from 6.8% and below the forecast of 7.4%. The US economy is showing signs of slowing down, and the markets will be keeping a close eye on Friday’s non-farm payroll report. If NFP is weaker than expected, we could see the likelihood for a 50 basis point increase. Currently, the markets have priced in a 66.5% likelihood of a 75bp hike, versus 33.5% for a 50bp increase, according to CME’s FedWatch.