The U.S. Department of Commerce released plans for a $50 billion investment program

There’s been plenty of buzz surrounding chip stocks of late, amid news that the U.S. is cracking down on exports to China. While this news weighed on the semiconductor sector last week, things are looking up after earlier today the U.S. Department of Commerce released plans for a $50 billion program to subsidize chip research and manufacturing. Advanced Micro Devices, Inc. (NASDAQ:AMD) initially enjoyed a positive reaction to the news, though the weight of the broader market’s selloff has since put pressure on the equity, which was last seen down 0.8% at $79.57.

It’s been a rough road for the equity, which has lost 45.3% this year, and over 28% in the last 12 months. AMD staged a notable rally in July, though this positive price action lost steam at the 150-day moving average, which also put pressure on the stock back in March of this year. 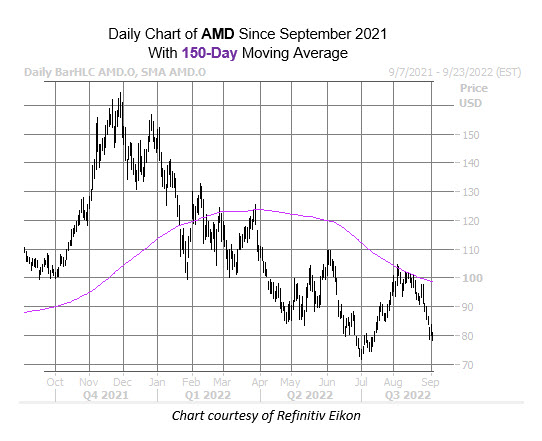 Amid all these big updates for the semiconductor sector, Advanced Micro Devices stock has once again landed on Schaeffer’s Senior Quantitative Analyst Rocky White’s list of names that have attracted the highest weekly options volume within the past two weeks. Per White’s table, 2,532,909 calls and 2,295,743 puts have been exchanged during this time period, with the weekly 8/26 98-strike call and 90-strike put being the most popular. 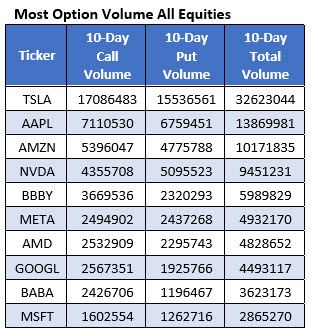 While calls are still just outpacing puts, the latter haven’t been more popular during the past year. This is per AMD’s 10-day put/call volume ratio of 0.94, which sits higher than all other annual readings at the International Securities Exchange (ISE), Cboe Options Exchange (CBOE), and NASDAQ OMX PHLX (PHLX).