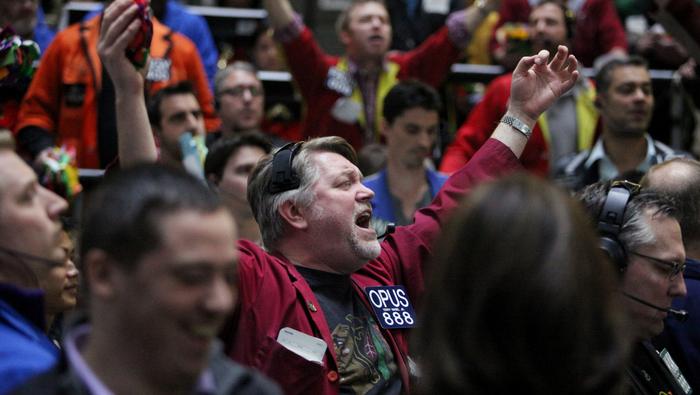 The Dax traded higher in European trade as market sentiment was buoyed by US tech earnings and Eurozone data surprises. The euro-zone economy expanded by more than economists expected, putting it on a firmer footing as surging inflation and a possible Russian energy cutoff threaten to tip it into a recession. Spain and Italy both reported second-quarter growth of 1% or more from the previous three months,despite the upside surprise, Germany Europe’s No. 1 economy stagnated. Highlighting persistent difficulties, inflation in the 19-member currency bloc soared to a fresh record, surpassing forecasts.Even though GDP growth was still slightly positive in the second quarter, demand is already cooling significantly at this point. The latest all-time high inflation numbers coincide with growing recession fears. Consumer prices jumped 8.9% in July with economists estimating a figure of 8.7%. After slowing in June, a gauge of underlying inflation that excludes energy and food also hit a record of 4%.

The intensifying price pressures prompted the ECB to surprise economists by delivering a half-point increase in its deposit rate this month. President Christine Lagarde said at the time that it’s important to address any sign that inflation expectations are becoming entrenched. The latest data will add to calls for the European Central Bank to follow up its first interest-rate hike since 2011 with another big move.

Earnings continue to filter through from the Eurozone with many companies adjusting earnings outlooks for the second half of the year. Among the notable movers today we have Zalando SE with gains of 7.9% for the session. 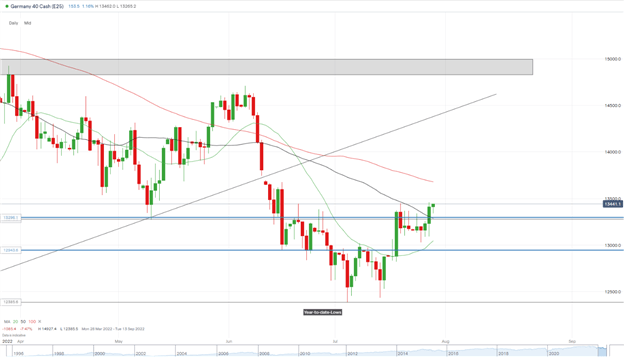 From a technical perspective, the daily chart shows pricesfinally breaking above the 50-SMA. We came within a whisker of the key psychological level (13000) while printing bullish hammer candlestick which indicates the potential for more upside.

We are already moving higher with price looking likely to test the 100-SMA. Any retracement may provide would-be-buyers with an opportunity.

The blue-chip index was led higher by financial stocks in European trade in what looks set to be a positive month for equity markets.UK mortgage approvals fell more than forecast in June and consumers dramatically stepped up their borrowing, both signs that the cost-of-living crisis is tightening its grip on the economy.The fall in mortgage lending points to a loss of momentum in the housing market, which boomed during the pandemic. Lloyds Banking Group Plc, the biggest UK mortgage lender, this week predicted house prices will grow just 1.8% this year and fall 1.4% in 2023.

NatWest today bolstered guidance and shareholder returns as the state-backed lender reported first-half profits of £1.9 billion.The bank now expects an annual underlying income of about £12.5 billion, which compares with more than £11 billion forecast in April. NatWest shares were up 7.4%. Other big risers in the index included British Airways owner IAG as it reported a return to quarterly profit for the first time since the pandemic and said that forward bookings showed “sustained strength”. Notable movers Ocado PLC and Aveva Group PLC posted gains of 5.8% and 4.5% respectively. 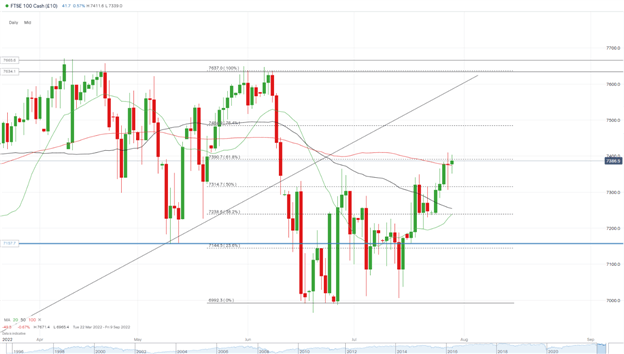 The FTSE closed yesterday as a doji candlestick signaling indecision which is surprising given the bullish nature of indices yesterday. We have however finally broken above the 50% fib level and retested yesterday before closing higher. We currently trade above the 20, 50 and 100-SMA with higher prices looking likely. Any pullback in price might provide better opportunities for would-be-buyers to get involved.