It’s been over 22 years since Alan Greenspan—who served as Fed chairman before Ben Bernanke, Janet Yellen and Jay Powell—turned from a monetary hawk to an intense dove, courtesy of a cratering stock market.

On January 3, 2001, the Fed chair cut the Federal Funds Rate from 6.5% to 6.0% in response to a declining stock market and weak economic activity. It would ultimately mark the first rate reduction in a series of 13 such actions spanning 2.5 years.

The NASDAQ closed at 2,617 on the first day of the pivot. Though the index had already halved from its high less than a year before, Greenspan’s new interest rate tack was not enough to gin up the bulls.

The market only found its footing again in October 2002—when Greenspan had already chopped the Funds Rate to 1.75%, on the way to 1.00% the following year.

Today, the stock market has been in rally mode since June 16, largely on the prospect of the Fed implementing a much-awaited pivot to a less hawkish policy. The futures market anticipates the Fed’s most likely path will be a tightening of policy from the current 2.25%–2.50% range clear to the 3.50%–3.75% area, perhaps around the December meeting. The futures market then sees the Fed on pause to mid-2023, maybe beyond. The rate cuts would then begin sometime thereafter, in an “out” month.

That rate-cutting program, should it come to pass, could also take some time. It might go on for a year, or two, or three.

Even so, that may not be enough for the stock market, if the 2001 and 2007 rate cut experiences are anything to go by. In figure 3, I circled the aforementioned “Greenspan pivot,” along with Bernanke’s September 2007 pivot. Both came nearly two years prior to the stock market’s ultimate bottom. 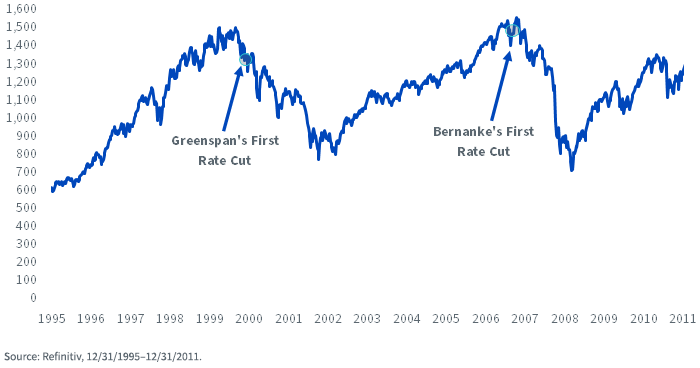 Whether it stays this way, I cannot be sure, but the market has a clear “risk on/risk off” dynamic: value was working at the beginning of the year, when the stock market was declining (figure 3). Notwithstanding the ugly action last week, it has been the opposite since June 16: growth is leading to the upside.

For investors who are questioning the staying power of the rally, we have no shortage of value Funds. One that has gotten some considerable attention in 2022 is the WisdomTree U.S. High Dividend Fund (DHS), which has been a natural beneficiary of the market’s newfound love of value stocks.

Originally published by WisdomTree on 29 August 2022.

Important Risks Related to this Article

There are risks associated with investing, including the possible loss of principal. Funds focusing their investments on certain sectors increase their vulnerability to any single economic or regulatory development. This may result in greater share price volatility. Dividends are not guaranteed, and a company currently paying dividends may cease paying dividends at any time. Please read the Fund’s prospectus for specific details regarding the Fund’s risk profile.

Elon Musk-Tim Cook Spat Not Over? iPhone Users May End Up Paying More Than $8 For Twitter Blue – Apple (NASDAQ:AAPL)