Options Bears Pile on Freight Stock Ahead of Earnings

CSX will report earnings next week on July 20

Freight and logistics concern CSX Corporation (NASDAQ:CSX) has popped up on our radar today, as it’s seeing an unusually high amount of volume in its options pits. So far, 8,211 calls and 10,000 puts have been exchanged, volume that’s nine times the intraday average. The two most popular positions by far are the August 30 put and the 40-strike call in the same series. CSX was last seen down 1% at $28.45, which means some of these put traders could be speculating on the $30 level serving as a ceiling for the underlying equity until these contracts expire on Friday, August 19.

Before then, CSX will step into the earnings confessional after the close on Wednesday, July 20. The stock has a history of mostly positive post-earnings moves, as five of its last eight next-day returns have been higher. Regardless of direction, CSX has averaged a post-earnings move of 3.2%, which is slightly lower than the 5.6% move the options pits are pricing in for Thursday, July 21.

CSX has been the subjects of several bear notes during the past couple weeks. Last Wednesday, July 6 Citigroup dished out a round of price-target cuts to the rail operator sector, noting freight volume during the second quarter missed expectations, while diesel prices continue to surge. Since then, no less than four analysts have lowered their price objectives as well. This includes two price-target cuts today; Evercore ISI slashed its price objective to $35 and Barclays lowered its estimate to $39.

A closer look at analyst sentiment shows 10 covering brokerages calling the equity a “buy” or better, compared to six “hold” or worse ratings. Meanwhile, the 12-month consensus price target of $36.44 is a 27.4% premium to current levels.

The freight stock has been chopping lower since late-April, when it finally ran out of steam near the $38 level. The stock’s 30-day moving average has helped guide it lower, and today’s trading has the shares sitting dangerously close to their July 5 annual low of $28.09. Year-to-date, CSX has shed 24%.

Now may be an opportune time to weigh in on the security’s next move with options. This is per CSX’s Schaeffer’s Volatility Scorecard (SVS), which comes in at 95 out of 100. In other words, the equity has exceeded option traders’ volatility expectations in the last year. 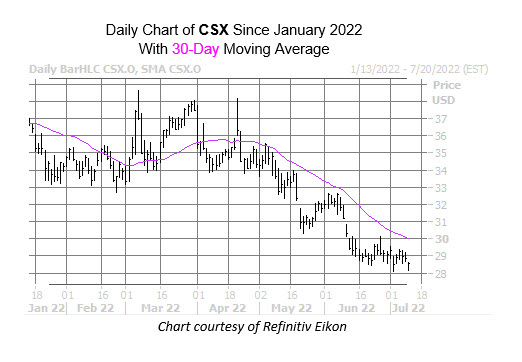