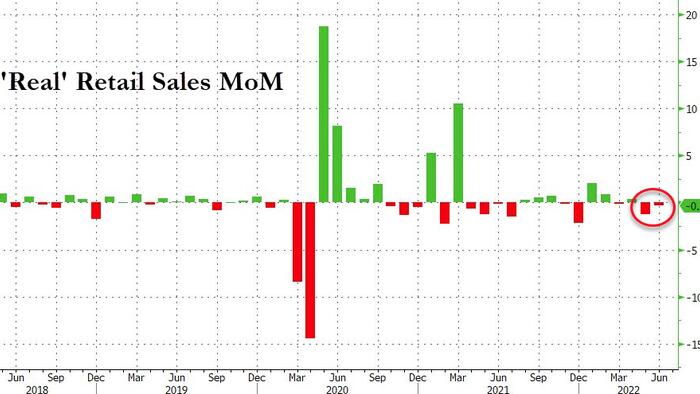 Despite collapsing consumer sentiment (and real wages slumping), analysts expected retail sales to rebound in June (except the almost omniscient BofA expects a negative print) after the ‘surprise’ drop in May driven by a drop in auto sales. It turns out BofA was wrong for once as headline retail sales rose 1.0% MoM (ahead of the +0.9% expected) – the best month since March…

Just 3 categories were down in June:

Finally, as a reminder, retail sales are notional, not ‘real’. While adjusting the headline retail sales print for inflation (via CPI) is rough, it gives us some idea of the ‘real’ state of the American consumer’s appetite for buying more stuff (or less). This is the second straight month of contraction in real retail sales (and 3rd of the last 4 months)…

As Alex Pelle, US economist at Mizuho Financial Group Inc., said in a note last month, “the report implies a very negative inflation-adjusted number on goods consumption, and the real-time GDP nowcasts are likely to be marked down significantly.”

Is the US economy really strong enough to cope with any more rate-hikes?