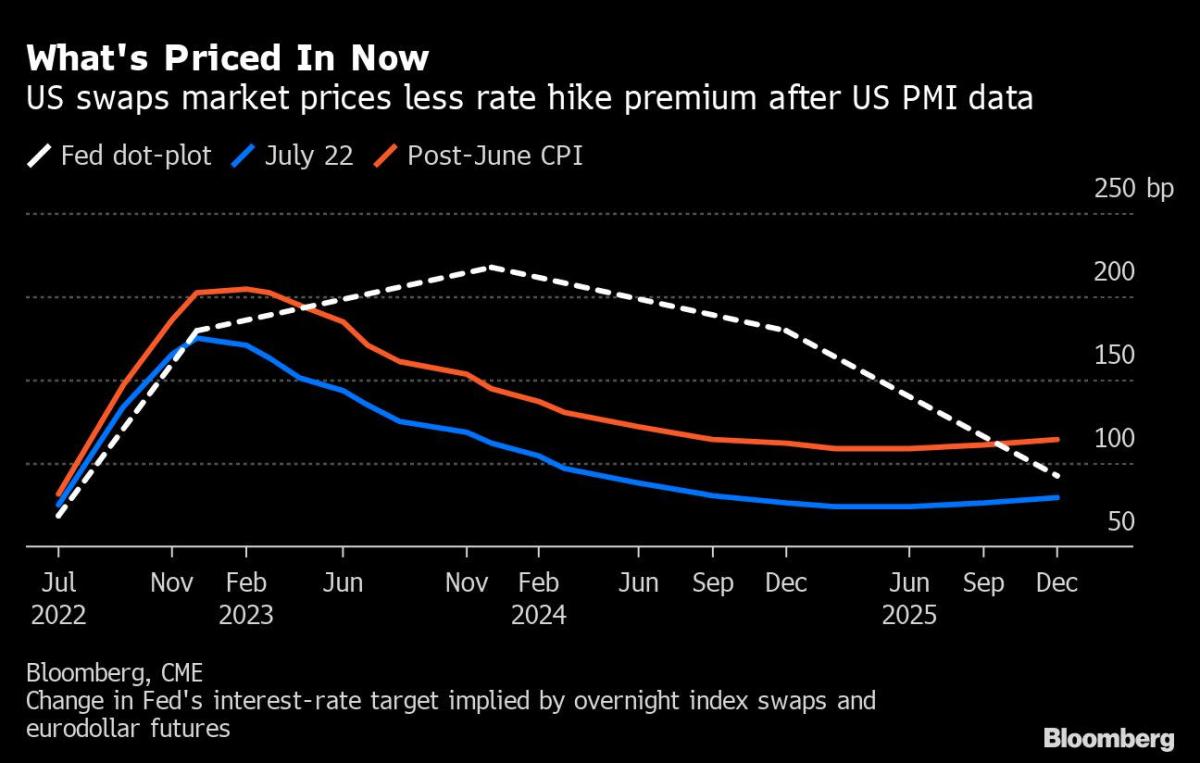 (Bloomberg) — Treasuries rallied sharply after data showing a contraction in US business activity for the first time since 2020 heightened fears the economy will plunge into a recession.

The slide in bond yields gathered pace on Friday, with the weak economic reading spurring bets the Federal Reserve will reduce the size of rate hikes to half a point in September after an all-but-certain 75-basis-point increase in July. The 10-year yield sank below 2.8%.

“There is no denying that the economy is decelerating,” said Gregory Faranello, head of US rates trading and strategy at AmeriVet Securities. “If it continues, there is a prospect that the Fed pulls back its pace of tightening once it goes 75 next week.”

The Fed is seeking to cool off demand in response to surging prices that have persisted longer than expected. If the Fed does deliver another 75-basis-point move next week, the combined increase of 150 basis points over June and July would represent the steepest rise in Fed rates since the early 1980s when Paul Volcker was chairman.

The “right thing to do” at the moment is to have stronger cash levels and take advantage of higher relative rates in the front-end of global curves, Jerome Schneider, head of short-term portfolio management and funding at Pacific Investment Management Co. told Bloomberg Television.

The rally in the bond market has been accompanied by large block trades in five-, and 10-year futures, indicating the initiation of fresh long positions in these parts of the Treasury curve by investors leaning toward a stalling economy.

After a strong initial reaction to Friday’s economic data, Treasury yields came off session lows. The 10-year rate dropped 12 basis points to 2.75%, after trading as low as 2.73%.

Treasury yields still lagged declines seen in eurozone debt rates. With the latest economic data showing that Europe is also hurtling toward recession, traders are reining in wagers for hikes this year and next. German two-year yields plunged as much as 31 basis points to 0.37% on Friday.