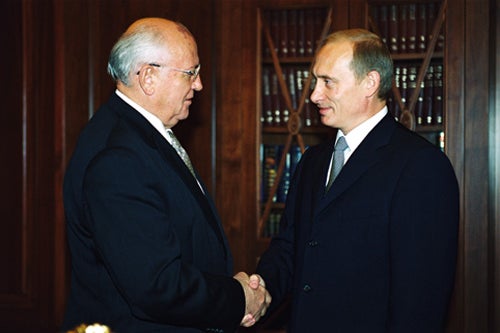 Russian President Vladimir Putin expressed his deepest condolences over the death of the former president of the Soviet Union, Mikhail Gorbachev.

What Happened: “Vladimir Putin expresses his deepest condolences over the death of Mikhail Gorbachev. In the morning he will send a telegram with condolences to the relatives and friends,” Kremlin Spokesman Dmitry Peskov told TASS on Tuesday.

Gorbachev, 91, the first and the last leader of the Soviet, died on Tuesday after a serious and prolonged illness. He is known to have ended the Cold War without bloodshed during his reign of power between 1985 and 1991. His reforms as Soviet leader transformed the Union and allowed Eastern Europe to free itself from Soviet rule.

The publication noted that Putin met Gorbachev last time in Novo-Ogaryovo in March 2006, the day after his 75th birthday. However, he has been sending out birthday greetings to Gorbachev every year.

“I’m saddened to hear of the death of Gorbachev. I always admired the courage & integrity he showed in bringing the Cold War to a peaceful conclusion. In a time of Putin’s aggression in Ukraine, his tireless commitment to opening up Soviet society remains an example to us all,” Johnson tweeted.