West Coast vs. East Coast Economy: Which Is Bigger? 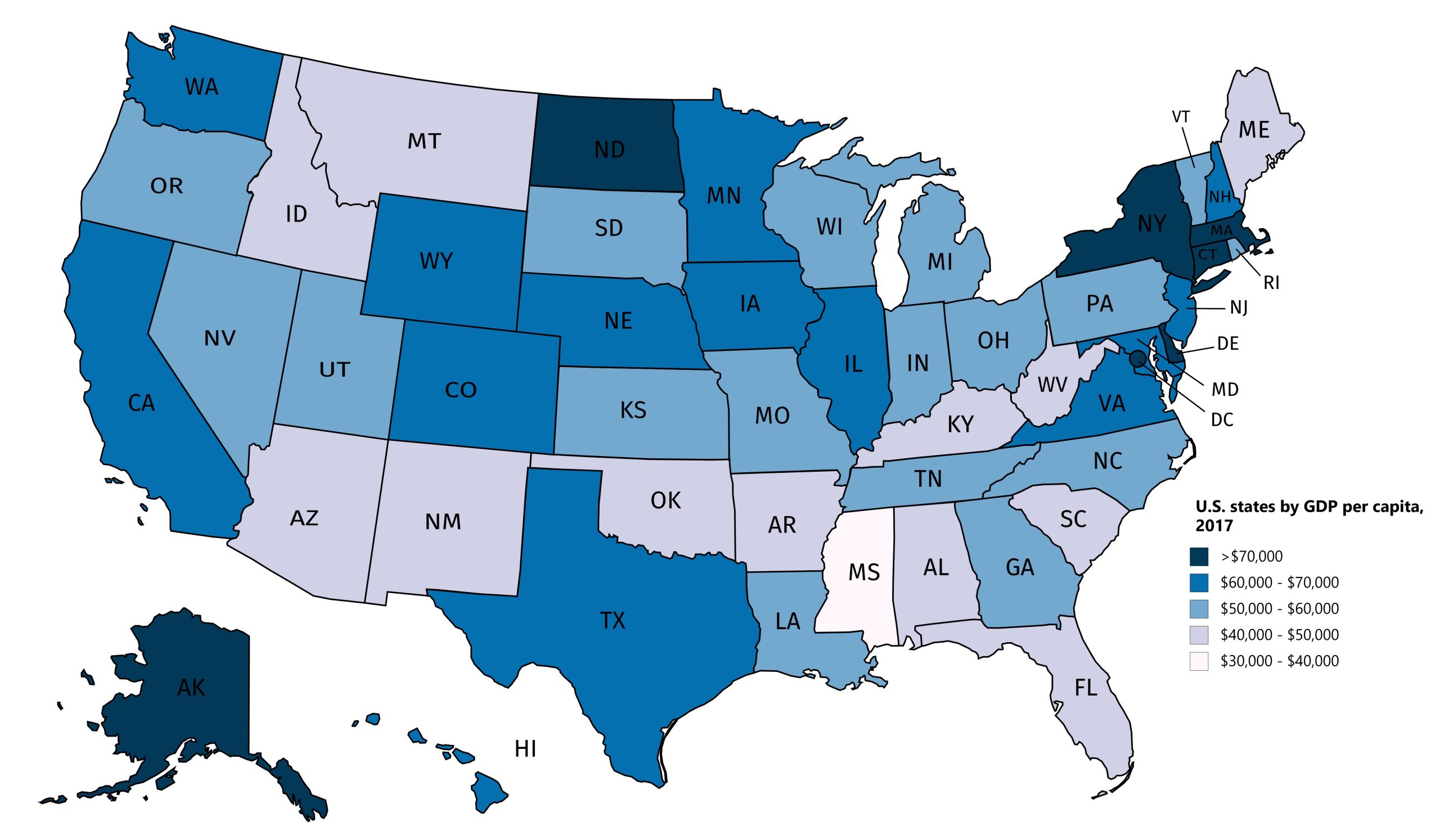 If California was a nation, it would be the world’s fifth-largest economy, edging out Great Britain. The state’s gross domestic product was an estimated $3.1 trillion in 2019, a growth of $162 billion from a year before. It experienced a slight drop in 2020 to $3 trillion but rebounded to almost $3.4 trillion by the end of 2021.

In an East-West comparison, it depends on the choice of comparisons. The New York City region alone is much smaller at over $1.8 trillion in 2021. But count in just the two next-biggest economies on the East Coast and the figures for the East Coast are roughly equal to those for the West Coast.

California is a triple threat economically. The technology sector is centered in San Francisco and the surrounding region, now known as Silicon Valley. The entertainment industry works out of Los Angeles. And the Central Valley harvests fruits and vegetables.

But don’t forget the wine industry. California wine sales in the U.S. alone sailed above $45 billion in 2021, a 14% increase from the previous year.

On top of that, California has seen a surge in growth attributed to the financial services industry and upwards pressure on real estate prices. Both have seen strong growth of at least 6% from 2013 to 2018. Out of all the states, California ranks fourth in gross state product growth.

The West Coast has at least one other big advantage: It’s the gateway to international trade. California and Washington both have major ports for trade between the U.S. and Asia that support the exchange of goods, dominated by American agricultural products and Asian manufactured products. As Asian economies continue to develop and participate more in the global economy, these ports have become increasingly integral to the world economy.

Any consideration of the West Coast economy should not leave out Oregon and Washington state. Both were ranked among the top half of the states nationally in GDP growth in 2021.

The Pacific Northwest has become a center of technological innovation as the headquarters of Microsoft and Amazon as well as other businesses including retailer Costco and Starbucks.

If we’re going to compare apples to apples, let’s first take a look at California versus New York State.

New York State’s GDP in 2021 was $1.9 trillion, far smaller than California’s $3.4 trillion and roughly comparable to the economy of Canada.

However, given New York City’s vast sprawl across several states, it might be more reasonable to consider the New York metropolitan area as compared to California. The New York metro region had a gross metropolitan product (GMP) of almost $2 trillion in 2021, according to the United States Conference of Mayors, with the prediction to grow to an estimated $2.3 trillion by 2023.

But in terms of East Coast economies, that omits the Philadelphia area, at about $478 billion, and the Boston area, at about $527 billion. Those three regions alone roughly equal California’s economy, while leaving out a number of smaller but not insignificant cities.

New York City is, of course, the financial capital of the U.S., if not the world, and has significant stakes in media, publishing, and new technology. Even though finance accounts for 90% of the jobs, there is only 5.2% of growth expected from 2018-2028. The New York City industries with the most expected growth over the projected decade are ambulatory health care services (65.6%), warehousing and storage (56.4%), and other information services (52.5%).

Topping it off, many of America’s global corporate giants are headquartered in the New York City area, including Verizon, JPMorgan Chase, Pfizer, Citigroup, and MetLife.

Special Considerations on West and East

The West Coast versus East Coast question may not be relevant much longer.

Google and its parent company, Alphabet, are headquartered in San Francisco, but Google has 12,000 employees at its offices in New York City, as of 2021. California has Silicon Valley, but new media companies like Vice Media, Snapchat, and BuzzFeed operate offices out of New York, as do many traditional print media companies that have transitioned to the internet.

New York dominates banking, but Wells Fargo is based in California. For that matter, Bank of America is headquartered in Charlotte, North Carolina.

As of 2021, there are no bigger state economies in the U.S. than California, Texas, and New York, but there are faster-growing economies. Among them, according to figures from the U.S. Bureau of Economic Analysis, Nevada and Indiana come close to California’s 7.8% growth rate while Tennessee and New Hampshire top the ranking.