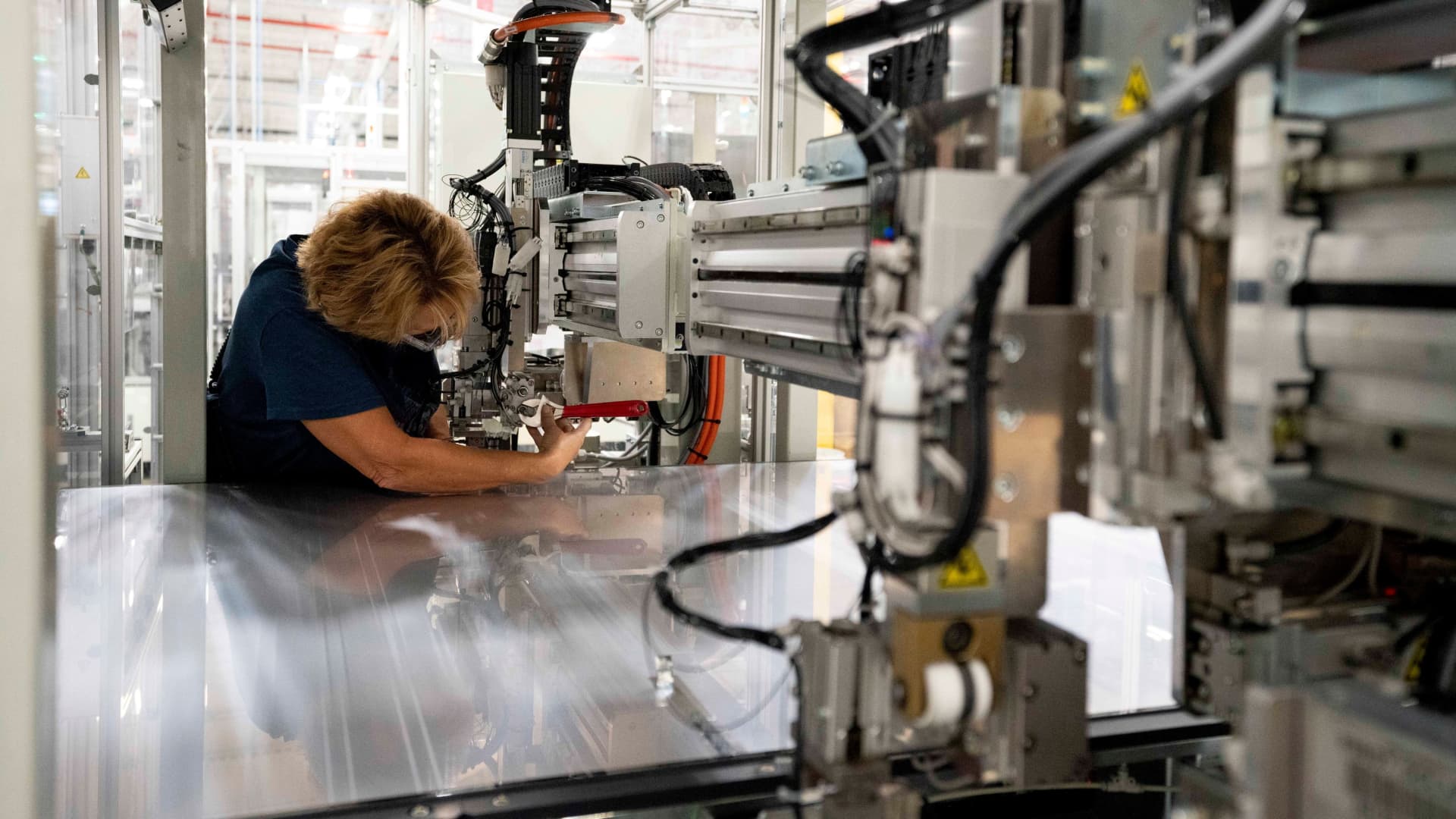 Connie Black makes adjustments to the manufacturing line for the series 6 solar panels seen during a tour of a First Solar plant in Walbridge, Ohio, October 6, 2021.

First Solar announced Tuesday that it will build a new solar panel manufacturing facility in the U.S. on the heels of the Inflation Reduction Act, which incentivizes domestic manufacturing.

The company will invest up to $1 billion in the new factory, which it plans to build in the Southeast of the U.S. The newly announced plant will be the panel maker’s fourth fully integrated U.S. factory.

First Solar also said Tuesday that it will spend $185 million upgrading and expanding its existing facilities in Ohio.

CEO Mark Widmar pointed to the IRA as the key catalyst that made the company decide to build another factory in the U.S. rather than looking elsewhere.

The funding packages create, for the first time, a “long-term view and understanding of the industry, and policies aligned to that industry,” he told CNBC.

“With that level of clarity, we stepped back and evaluated the alternatives or the options of where we could go with our next factory and when we looked at it comprehensively the U.S. was a very attractive option,” he said.

Widmar added that this is the first time the entire supply chain has been incentivized, from the manufacturer to the generating asset and finally to the end customer.

“With that type of alignment, you can create partnerships and opportunities to grow together collectively and more of a win-win type of structure than maybe we had before the implementation of the IRA,” he said.

First Solar said the new factory will manufacture 3.5 gigawatts of solar modules annually by 2025, with the company’s Ohio facilities posting cumulative annual production capacity of over 7 GW by 2025.

By comparison, the U.S. added 3.9 GW of solar capacity during the first quarter of 2022, according to the Solar Energy Industries Association. The country’s total solar industry now stands at 126.1 GW, which is enough to power 22 million homes, according to SEIA.

Shares of First Solar have surged 65% since the end of July when Senate Majority Leader Chuck Schumer, D-N.Y., and Sen. Joe Manchin, D-W.V. announced their surprise agreement on the climate, health care and tax bill.

The legislation, which swiftly passed the House and Senate and was signed into law by President Joe Biden, benefits First Solar in several ways, including through the production tax credit for domestic manufacturers. First Solar is the largest U.S.-based developer of solar panels, with a focus on utility-scale panels.

The factory announcement comes as First Solar struggles to keep pace with booming demand. During its second quarter earnings call, First Solar said it’s sold out through 2025, with a backlog of 44 GW.

Widmar said First Solar wants to move quickly when building out its new factory. One of the company’s considerations is a site that’s as close to shovel-ready as possible. Other factors include the type and availability of workers in the area.

First Solar is aiming to have identified the site by the end of the current quarter.

“I think the industry is in the best position it ever has been…for growth beyond any expectations that anyone would have envisioned,” Widmar said.