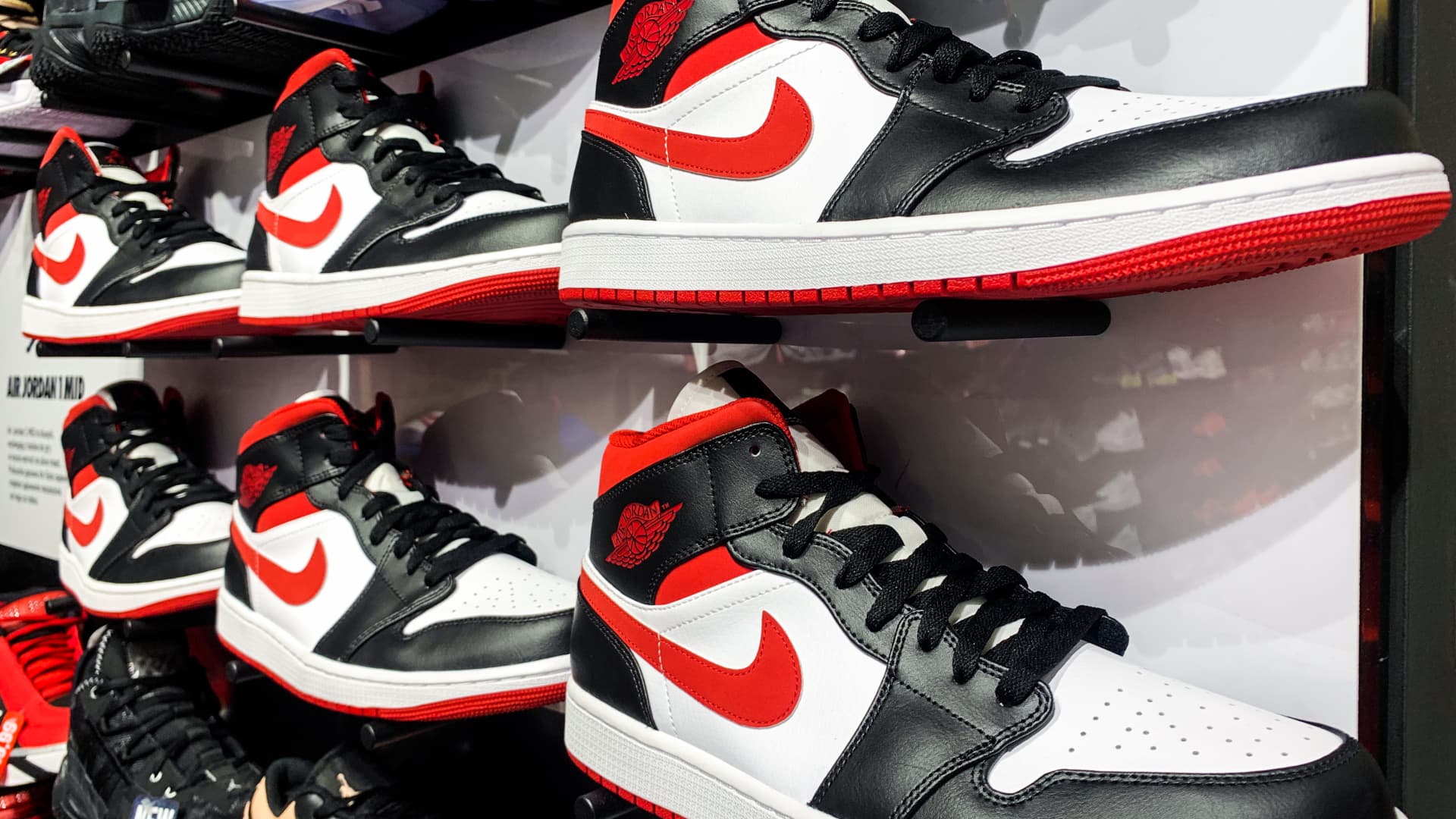 Nike Air Jordan shoes are seen in the store in Krakow, Poland on August 26, 2021.

Nike on Monday said demand for sneakers and sportswear largely held up in the fiscal fourth-quarter, despite a Covid lockdown in China and a tougher consumer environment in the U.S.

But the company said challenges such as higher transportation costs and longer shipping times are persisting.

Shares fell about 3% in aftermarket trading, despite the company topping Wall Street’s earnings and sales expectations.

Nike anticipates first-quarter revenue will be flat to slightly up versus the prior year, as it continues to manage Covid disruption in Greater China. It said it anticipates full-year revenue will grow by low double-digits on a currency-neutral basis.

On a call with analysts, he said the company is “optimistic” as it enters the new fiscal year. He said production has surpassed prepandemic levels and inventory is “flowing again into our largest geographies.”

“We continue to closely monitor consumer behavior, and we’re not seeing signs of pullback at this point in time, and so we continue to execute the strategy and the plan we have, which is working,” he said.

Here’s how Nike did in its fiscal fourth quarter compared with what Wall Street was anticipating, based on a survey of analysts by Refinitiv:

Nike is in the middle of a strategy shift, as the company sells more merchandise directly to shoppers and trims back the amount sold by wholesale partners such as Foot Locker. Its direct sales grew 7% to $4.8 billion in the quarter versus the year-ago period. Nike’s wholesale business trends were the opposite. Sales in that division dropped 7% to $6.8 billion.

In North America, Nike’s largest market, total sales fell by 5% to $5.11 billion in the fourth quarter.

In Greater China, its sales took a bigger hit due to lockdowns. Total sales in the country dropped by 19% to $1.56 billion versus $1.93 in the year-ago period.

Yet Friend said the declines have to do with fleeting factors, not shopper loyalty and desire for Nike products. For three consecutive quarters, he said, consumer demand has exceeded available inventory. Now, he said, supply is finally normalizing.

Nike faces a complex backdrop, however. As the prices of gas, groceries and more rise, some consumers may skip over discretionary items or trade down to lower-priced brands. Nike’s direct sales strategy comes with risk if its rivals wind up with more shelf space and higher sales at wholesale retailers. And as supply chain challenges continue, merchandise can get stuck in the wrong spot or arrive too late.

The company is paying about five times the rate it paid prepandemic to put product in a container on a boat and move it from Asia to the U.S., Friend said. He said transit times are about two weeks longer than prepandemic.

In the three-month period, inventory rose to $8.4 billion — up 23% versus the year-ago period — driven by longer lead times from ongoing disruptions in the supply chain.

Nike said its board authorized a new four-year, $18 billion stock buyback program this month. It will replace the company’s $15 billion share buyback program, which will end in the coming fiscal year.