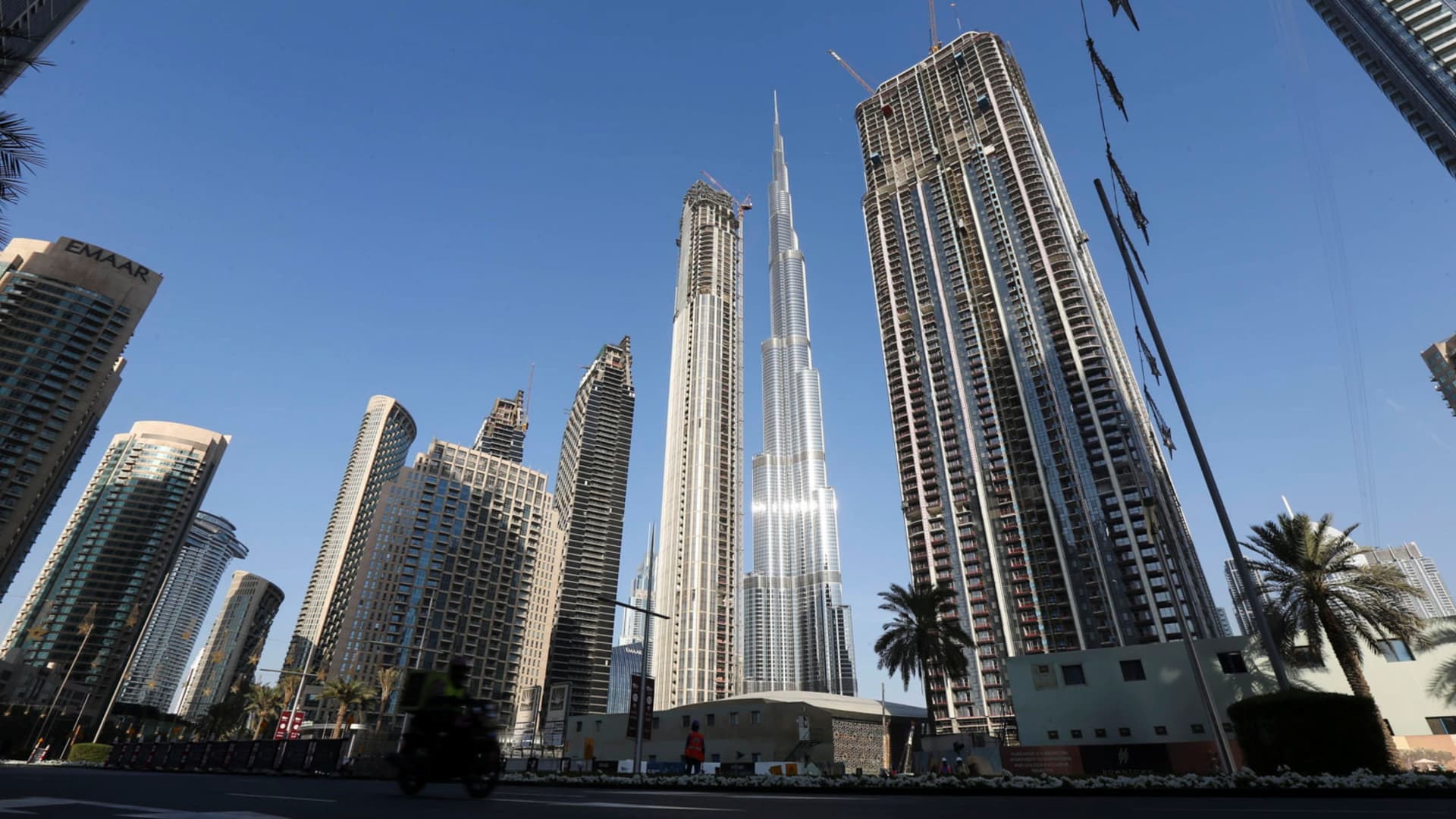 A general view of the downtown area in Dubai, United Arab Emirates, December 08, 2021.

DUBAI, United Arab Emirates — Shares of Dewa, the Dubai Water and Electricity Authority, surged more than 20% Tuesday as the giant utility company began trading on the public market, marking the first listing of its kind in the region.

Shares were trading at 3.02 UAE dirhams (82 cents) on the Dubai Financial Market exchange in the first few minutes of trading, versus the IPO price of 2.48 dirhams per share. They soon pared some gains to trade at 2.88 dirhams per share by 1 p.m. local time.

Dewa in March announced its plan to sell a 6.5% stake by offering 3.25 billion shares in its public offering. Ahead of the listing, the company said that more than 65,000 local, regional and international investors took part in the IPO, raising about $6.1 billion.

Dewa is the exclusive provider of water, electricity and district cooling to Dubai’s 3.5 million local and expatriate residents.

One reason for the strong investor appetite is the company’s relatively healthy balance sheet — it had earnings of roughly $3.5 billion adjusted for the last financial year, and it’s also pledged to pay out about $1.6 billion in dividends over the next five years to its new investors.

Another is growing momentum among governments in the region to take their state enterprises public, as Gulf countries and the UAE in particular seek to diversify their economies away from oil.

“To start with the biggest listing and with such a massive success — which has seen 37 times over subscription — is something that gives quite a lot of momentum to other discussions we’re having on the market,” Hamed Ali, CEO of the DFM, told CNBC’s Dan Murphy on Tuesday following the IPO debut.

“It also reflects the confidence that investors have in the market, be it local liquidity or international liquidity that we ended up attracting to the exchange.” Ali added that the result was a testament to confidence in Dubai’s capital markets infrastructure and the emirate overall, in particular a sense of renewed confidence following the Covid-19 pandemic. Dewa CEO Saeed Mohammed Al Tayer declined to speak to CNBC shortly after the market open despite a prearranged interview.

The IPO represents a big step forward for Dubai’s capital markets — the emirate has been looking to improve its sophistication, depth, and retail trading participation and volumes over the past few years as it seeks to compete with not just Abu Dhabi but also Saudi Arabia across the border.

Dubai’s exchanges — Dubai Financial Market and Nasdaq Dubai — have lagged behind their regional peers, even seeing two high-profile de-listings since 2020 with the departure of major ports operator DP World and Dubai parks operator DXB Entertainments. The Abu Dhabi Securities Exchange, by contrast, was one of the best performing regional markets last year.

Dewa is expected to be just one of 10 companies coming to market in Dubai in the coming months, including firms like major toll road operator Salik and possibly companies within the Emirates Group.

Ali pointed to announcements by the Dubai government late last year, describing them as outlining 2022 as “the year when we will unlock the equity market.” The emirate’s leadership, he said, “is taking the lead in that space by bringing in 10 IPOs.” The four announced so far have been Dewa, major toll road operator Salik, telecoms software developer Tecom, and district cooling company Empower, which is a joint venture between Dewa and Tecom Group.