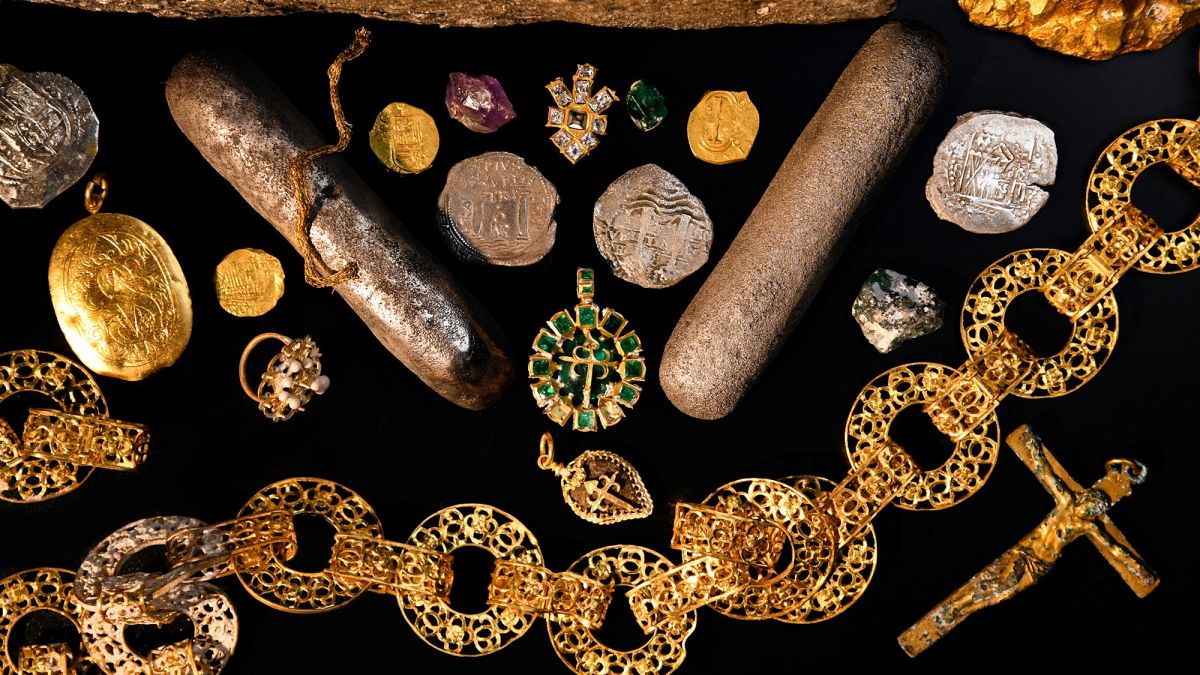 A treasure trove of gold coins, gemstones and jewels was recently uncovered at a 366-year-old Spanish shipwreck.

In an effort to conserve what’s left of the ship and its prized cargo, an international team of preservationists and underwater archaeologists has been working to recover objects from the shipwreck, which sits in the Atlantic Ocean about 43 miles (70 kilometers) off the coast of the Bahamas.

Known as the Nuestra Señora de las Maravillas (“Our Lady of Wonders” in Spanish), the 891-ton (808 metric tons) galleon was traveling between Spain and Colombia in 1656 to pick up a cargo of silver when a navigational error caused it to collide with another vessel in the Spanish fleet. The accident forced the ship to run aground on a coral reef; an estimated 600 of the 650 people onboard died in the crash, the organization said in a statement. More than three centuries later, the wreckage is spread across 8 miles (13 km) of the ocean floor.

Because historians often consider the Maravillas “one of the great treasure-laden Spanish galleons,” the shipwreck has become a target for looters. The vast majority of the treasure (approximately 3.5 million items) was ransacked between 1656 and the early 1990s, according to the Bahamas Maritime Museum (opens in new tab).

Related: 19th-century whaling shipwreck identified in the Gulf of Mexico

To help protect the remaining artifacts, Allen Exploration (AllenX), an organization that specializes in finding historical shipwrecks, has partnered with the Bahamian government to recover what’s left of the ship and its cargo.

“The Maravillas is an iconic part of the Bahamas’ maritime history,” Carl Allen, founder of Allen Exploration, said in the statement. “The wreck of the galleon had a tough history: heavily salvaged by Spanish, English, French, Dutch, Bahamian and American expeditions in the 17th and 18th centuries and blitzed by salvors from the 1970s to [the] early 1990s. So much data has been sadly lost from this ravaged wreck.”

Over the past two years, Allen and his team were able to recover a number of items from the wreckage, including the last remnants of the ship itself: a stone ballast, iron fasteners that at one time held the hull together and a wing nut from a bronze navigational instrument called an astrolabe. Other finds included items that were used by the crew, such as jars from Spain; plates from China and Mexico; and personal belongings, like a silver sword hilt, a pearl ring, wine bottles, and four pendants worn by knights of the Order of Santiago, a 12th-century Spanish and Portuguese religious and military order.

One of the gold pendants features a large, oval Colombian emerald and a dozen smaller emeralds, which may represent the Twelve Apostles, alongside a heraldic motif known as the Cross of St. James, CNN (opens in new tab) reported.

“How these tiny pendants survived in these harsh waters, and how we managed to find them, is the miracle of the Maravillas,” Allen said in the statement.

But perhaps the most captivating of all the finds is the precious cargo that the Maravillas was hauling: a stockpile of silver and gold coins, emeralds, amethysts and a 75-pound silver bar.

“The AllenX team is currently examining everything from ceramics to amethysts to maximize what knowledge this wreck can share with the world,” the organization said in the statement.

Many of the items recovered from the shipwreck will become a permanent collection at the Bahamas Maritime Museum, which opens in Freeport Aug. 8.