XLE: Not The Time To Be Buying Aggressively (Technical Analysis) (NYSE:XLE) 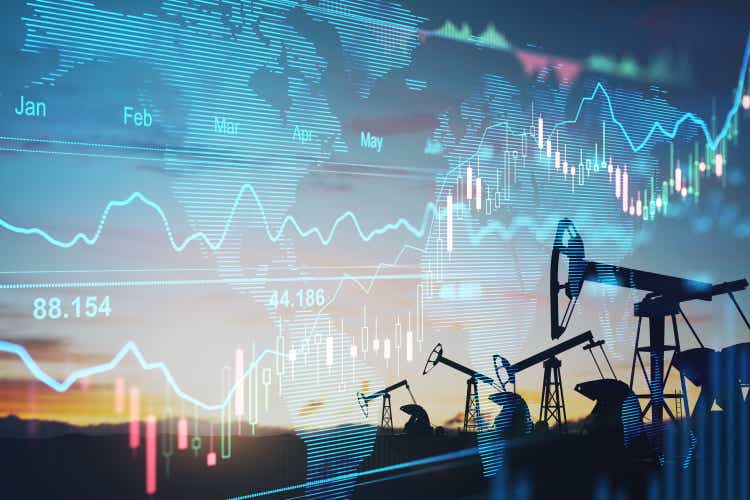 The Energy Select Sector SPDR ETF (NYSEARCA:XLE) has outperformed the SPDR S&P 500 ETF (SPY) since we last updated in July. We had expected the XLE to form a near-term bottom in July as it nearly gave up all its post-Russia/Ukraine conflict gains. However, we didn’t expect the energy sector to muster enough buying upside to outperform the market’s recovery over the past month. Therefore, the buying resilience on the XLE has surprised us, even though some red flags remain.

We observed that WTI crude (CL1:COM) has continued to hobble near its February lows, despite the positive sentiments in the XLE. However, the rapid surge in Henry Hub natural gas (NG1:COM) in breaking its June and July highs could have contributed to the re-rating in the XLE. Therefore, we postulate the bifurcation in the price action on the WTI crude and natural gas market could partially explain the outperformance observed in the XLE. Furthermore, we posit that the market had also anticipated robust Q2 earnings cards from the oil and gas leaders, which helped stoke buying sentiments. Notwithstanding, we must point out that the XLE’s upside momentum stalled somewhat in August.

Our analysis suggests that the short-term rally in the XLE should be petering out based on our previous thesis of a medium-term de-rating in energy stocks. Therefore, we urge investors looking to add more exposure to the XLE to wait for a pullback to successfully re-test its July support zone. If the re-test is successful, investors can consider taking short-term speculative positions to leverage the buying enthusiasm in the energy space.

As such, we reiterate our Hold rating on the XLE for now.

XLE Bottomed Out In July As Expected

As seen above, the XLE bottomed out resiliently in early July, forming a bear trap (indicating that the market denied further selling downside decisively). Therefore, it helped the XLE to recover robustly as it outperformed the SPY since our update in July.

However, investors should note that the XLE has been consolidating since the start of August, as momentum indicators are also overbought. Therefore, we postulate that its critical for buying upside to lift the ETF and sustain the current rally. Otherwise, a failure at its August highs could suggest a material de-rating by the market, as the XLE failed to retake its previous June highs. Therefore, the price action on the XLE is tentative currently, with no clear buy/sell triggers.

The WTI crude formed a validated bear trap last week after a series of bottoming price action. Therefore, we are confident that a short-term bottoming process in crude should support XLE at a critical juncture. Recent commentary by OPEC+ has also helped lift buying sentiments as Saudi Arabia’s Oil Minister highlighted that OPEC+ might cut production. The Kingdom is concerned with the bifurcation between underlying fundamentals and futures pricing. Prince Abdulaziz bin Salman accentuated:

The paper and physical markets have become increasingly more disconnected. [It’s] undermining the market’s essential function of efficient price discovery, and [has] made the cost of hedging and managing risks for physical users prohibitive. This vicious circle is amplified by the flow of unsubstantiated stories about demand destruction, recurring news about the return of large volumes of supply, and ambiguity and uncertainty about the potential impacts of price caps, embargoes, and sanctions. This is detrimental because without sufficient liquidity, markets can’t reflect the realities of the physical fundamentals in a meaningful way and can give a false sense of security at times when spare capacity is severely limited and the risk of severe disruptions remains high. – Bloomberg

Therefore, we urge investors to observe the price action. But, given last week’s supportive signals, a further rally in WTI crude is expected, which should lift buying sentiments in the XLE.

However, we noted that natural gas has surged and breached its previous highs in June and July. Notwithstanding, we maintain our thesis that such surges are ultimately unsustainable. Therefore, we caution investors to be wary of buying into such buying upside.

The recent buying momentum in natural gas could also have spurred the underlying strength seen in the XLE component stocks, despite the ongoing malaise in WTI crude. However, subsequent digestion of the rapid markup in natural gas prices could add pressure to the XLE moving forward.

We reiterate our Hold rating on the XLE for now.

We noted that buying support was robust in July, which corroborated our thesis of a short-term bottoming process. We expect further buying upside from WTI crude to lift sentiments further, but subsequent digestion in the natural gas market could pressure the buying momentum.

Therefore, we urge investors considering a speculative position in the XLE to be patient. Investors should bide their time for a successful re-test of its July lows before adding exposure.