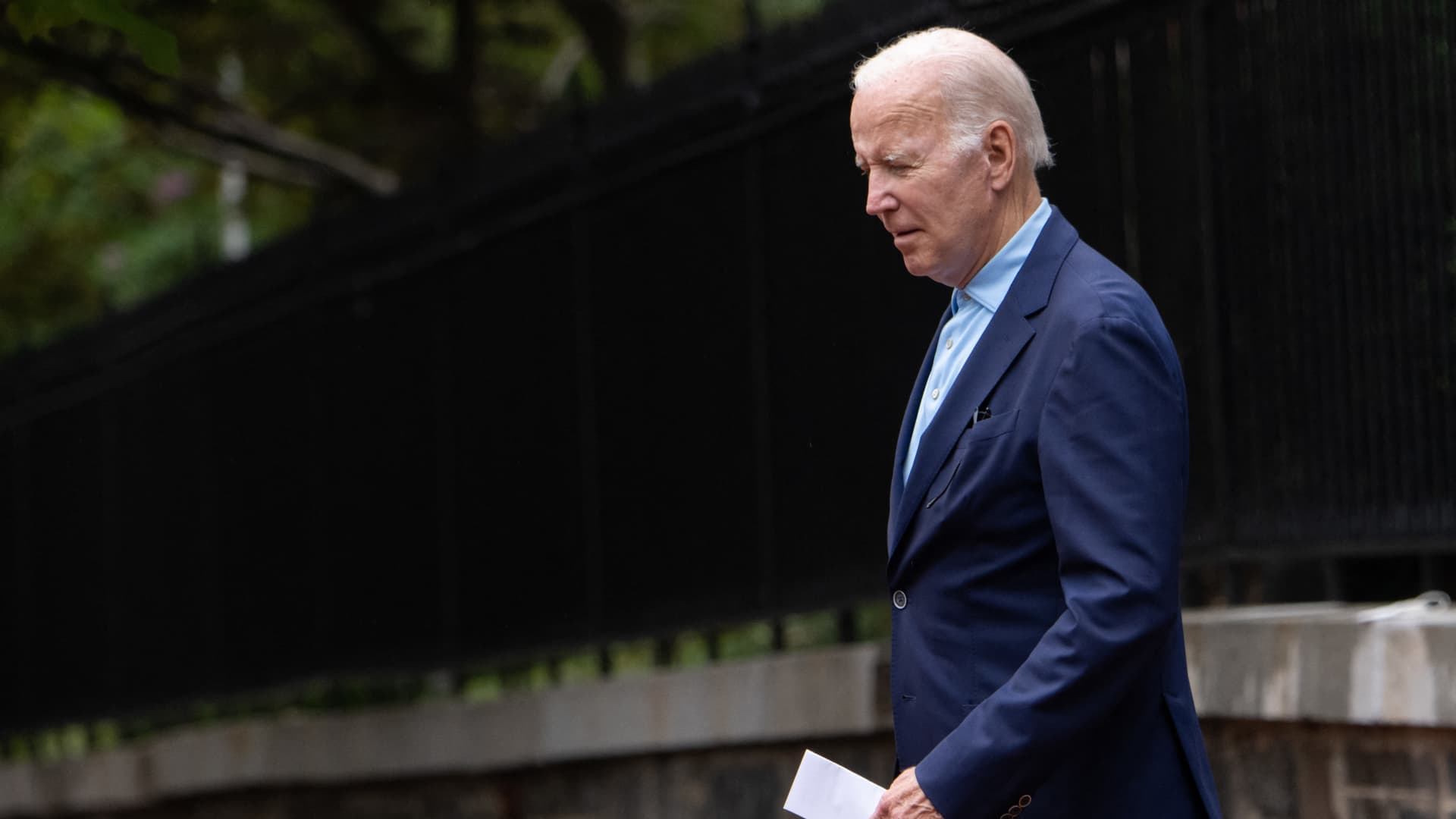 President Joe Biden‘s overall and economic approval numbers have reached the lowest levels of his presidency and fallen further than that of either of his two predecessors, according to the latest CNBC All-America Economic Survey.

With Americans feeling crushed beneath the weight of rising prices, Biden’s economic approval dropped 5 points from the prior survey in April to just 30%. The president’s economic record is supported by just 6% of Republicans, 25% of independents and 58% of Democrats, a very low number for his own party.

In comparison, President Donald Trump’s economic approval bottomed out at 41%, and President Barack Obama’s at 37%.

The poll of 800 people across the nation found that 51% believe the president’s efforts to combat inflation are making no difference, and 30% think they are actually hurting. Just 12% say they are helping. The poll, which took place from July 7 to July 10, has a margin of error of plus or minus 3.5%.

The president’s dismal numbers come amid the worst economic outlook measures CNBC has recorded in the 15-year history of the survey.

Of the participants, 52% believe the economy will get worse over the next year, and just 22% believe it will improve. Both are survey records, and they are worse than those found during the great financial crisis. More than 6 out of 10 of those polled expect a recession in the next 12 months. Another 6% believe the country is already in one. Such levels have only been found during actual recessions.

Just 38% of the public believe their home prices will rise in the next year, the lowest since the Covid pandemic.

The poll found that inflation is by far the top concern in the country, garnering twice as many votes as the next response: abortion, which was presented as a survey option for the first time. That was followed by crime, immigration and border security, jobs, and climate change. The coronavirus, which led the list for most of the past several years, ranked last.

Taking steps to stretch a dollar

Americans are employing a variety of means to make ends meet amid high inflation.

Some 65% of those polled say they are cutting back on entertainment, such as eating out or going to movies and concerts. Among participants, 61% report driving less and 54% say they are reducing travel. More than 4 out of 10 are spending less on groceries. A third are using credit cards more often, which could mean higher interest payments if they don’t pay off balances. The survey found 47% of the participants say they are taking at least four of these measures.

With gas prices high, 50% of the public say they support relaxing environmental rules to ease prices at the pump with 42% opposing, and 58% favor a tax on oil company profits rebated back to consumers.

When it comes to pocketbook issues, the survey found Republicans have a decided edge in the upcoming congressional elections. But the question is whether other issues, such as climate change and abortion, could give Democrats a boost.

Respondents who say immigration and border security, jobs, and, most importantly, the cost of living are their top concerns have a decided preference for Republican congressional control. For example, those most worried about jobs, prefer GOP control by a 54% to 31% margin. Those most concerned about the cost of living, prefer GOP congressional control by 47% to 38%. However, abortion ranks as the second-biggest concern, and those respondents prefer Democratic control of congress 67% to 24%.

Overall, Americans prefer Republican congressional control by a 44% to 42% margin, but that actually narrowed from a 10-point gap in the prior poll. Both the Republican and Democratic pollsters for the survey say this could be attributed in part to the emergence of abortion as a major issue, though both were skeptical it could have a significant impact on the outcome.

It remains to be seen if intensity on abortion or other social issues remains in place by November, and if inflation continues to be the leading concern.

Check out the full survey below: