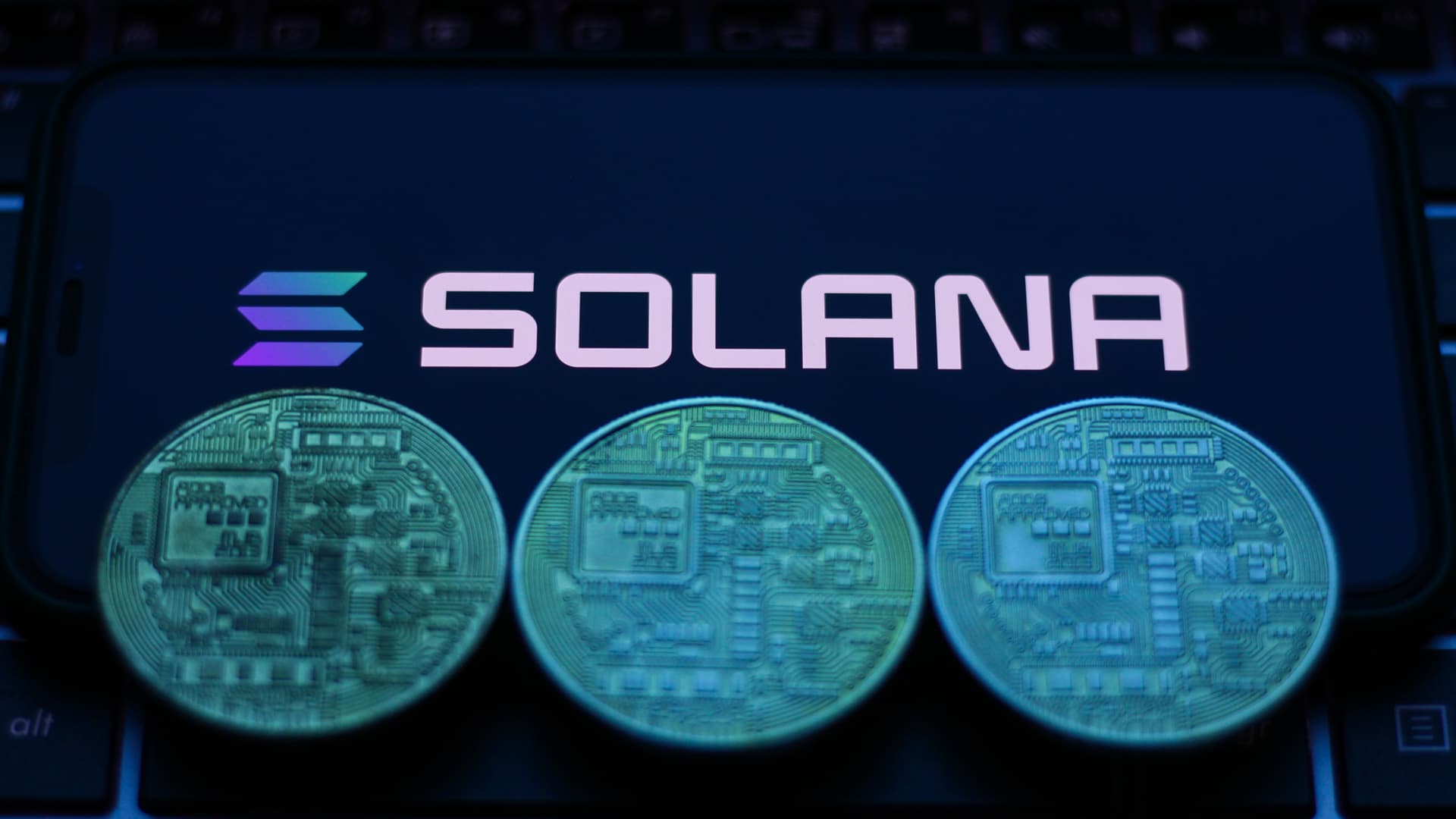 The logo of cryptocurrency platform Solana.

Nearly 8,000 digital wallets have been drained of just over $5.2 million in digital coins including solana‘s sol token and USD Coin (USDC), according to blockchain analytics firm Elliptic. The Twitter account Solana Status confirmed the attack, noting that as of Wednesday morning, approximately 7,767 wallets have been affected by the exploit. Elliptic’s estimate is slightly higher at 7,936 wallets.

Solana‘s sol token, one of the largest cryptocurrencies after bitcoin and ether, fell about 8% in the first two hours after the hack was initially detected, according to data from CoinMarketCap. It’s currently down about 1%, while trading volume is up about 105% in the last 24 hours.

Starting Tuesday evening, multiple users began reporting that assets held in “hot” wallets — that is, internet-connected addresses, including Phantom, Slope and Trust Wallet — had been emptied of funds.

Phantom said on Twitter that it’s investigating the “reported vulnerability in the solana ecosystem” and doesn’t believe it’s a Phantom-specific issue. Blockchain audit firm OtterSec tweeted that the hack has affected multiple wallets “across a wide variety of platforms.”

Elliptic chief scientist Tom Robinson told CNBC the root cause of the breach is still unclear, but “it appears to be due to a flaw in certain wallet software, rather than in the solana blockchain itself.” OtterSec added that the transactions were being signed by the actual owners, “suggesting some sort of private key compromise.” A private key is a secure code that grants the owner access to their crypto holdings.

The identity of the attacker is still unknown, as is the root cause of the exploit. The breach is ongoing.

“Engineers from multiple ecosystems, with the help of several security firms, are investigating drained wallets on solana,” according to Solana Status, a Twitter account that shares updates for the entire solana network.

The solana network is strongly encouraging users to use hardware wallets, since there’s no evidence those have been impacted.

“Do not reuse your seed phrase on a hardware wallet – create a new seed phrase. Wallets drained should be treated as compromised, and abandoned,” reads one tweet. Seed phrases are a collection of random words generated by a crypto wallet when it is first set up, and it grants access to the wallet.

A private key is unique and links a user to their blockchain address. A seed phrase is a fingerprint of all of a user’s blockchain assets that is used as a backup if a crypto wallet is lost.

The incident comes one day after the $200 million hack of the Nomad blockchain bridge. It’s the latest crisis to grip the crypto market in recent weeks.

“Four addresses are currently linked to the hacker, a far cry from yesterday’s ‘decentralized looting,’ which involved over 120 individual users,” said Deutscher. “This implies that it was a singular party who conducted the SOL exploit, although the specific details remain ambiguous.”

The Solana network was viewed as one of the most promising newcomers in the crypto market, with backers like Chamath Palihapitiya and Andreessen Horowitz touting it as a challenger to ethereum with faster transaction processing times and enhanced security. But it’s been faced with a spate of issues lately, including downtime in periods of activity and a perception of being more centralized than ethereum. A major outage in June knocked the Solana platform offline for several hours.

Ether, the native token of the ethereum blockchain, climbed 6% in 24 hours.